News #2: The discovery of an invisible grid – and a forgotten man

At first sight, Willem van de Velde the Younger’s view of a calm sea with ships is an expression of extraordinary stillness. However, looking closer we observe numerous small figures gesticulating and probably shouting messages to each other – sounds that must have been echoing clearly across the calm waters. They are busy arranging the sails and other activities on the ships. In the left foreground a rowing boat is approaching the ship with commodities or proviant.

To create this enchanting image of calmness and at the same time several layers of movement, Van de Velde needed a smooth support – and a preparatory sketch.

He chose an oak panel, and smoothened out eventual unevenness of the wood grain by applying a layer of lead-white paint, possibly with some chalk as a filler. The panel has an unusual, square format (36,4 x 41,1 cm), which contrasts to the more traditionally used horizontal format for marine painting. The square format is recurring in Van de Velde’s oeuvre, and apparently appealed to this artist.

In order to compose his seascape, Van de Velde made a preparatory sketch. We can deduce this from our studies of the image – and something that is almost invisible to the naked eye: a faint grid composed of six vertical lines and two horizontal lines was drawn on the surface of the panel. 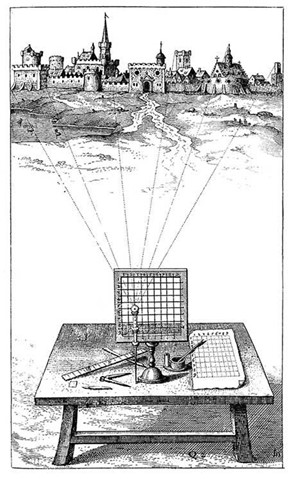 A woodcut engraving from 1617 by Robert Fludd (1574-1637) depicting a perspective frame with a grid and next to it a similarly squared paper to draw on in order to achieve correct proportions.

The grid can be observed in detail thanks to a photographical technique called infrared imaging. The rationale behind using infrared reflectography in the study of paintings is that it enables us to ‘see through’ paint layers that are impenetrable to the human eye. If an artist has begun a painting by drawing the design in black (known as an underdrawing) on a white ground, an infrared image can make this visible.* 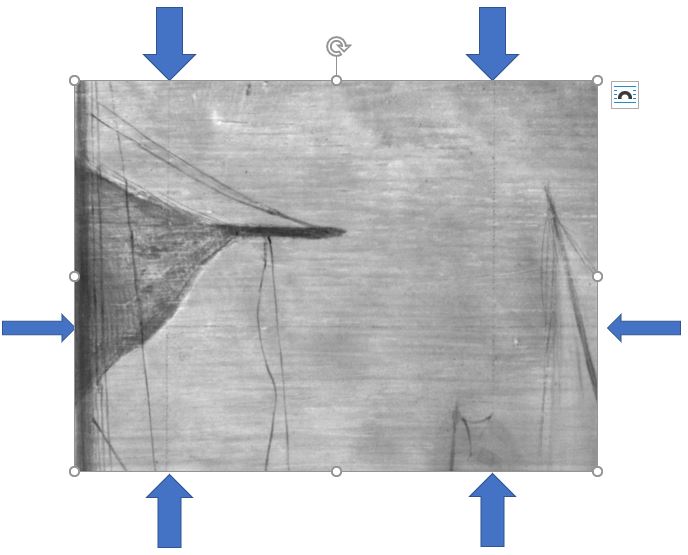 Infrared image with the drawn grid indicated with arrows (detail).

The studies show, that Van de Velde would first draw the scene he wanted to paint on a piece of paper. He would then draw a grid on this drawing, and use it to copy its proportions onto the brightly prepared panel using a silverpoint or graphite stick. Next, the artist started his painting by carefully following the contours of the underdrawing of the composition, from the large vessels to the tiny people.

One figure, however, was forgotten in the painting process. He now only exists as a ghost figure: his outline is seen on the most left ship in the middle ground. 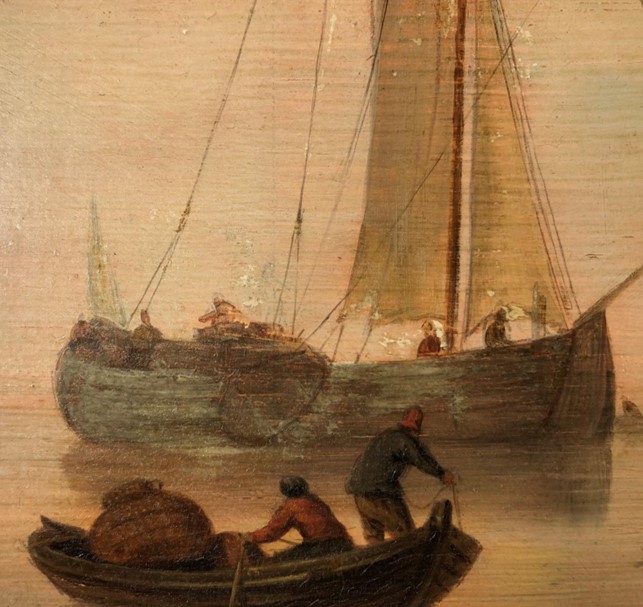 Detail with non-painted ghost-figure in the middle of the boat.

*Infrared imaging:
Infrared radiation passes through paint until it reaches something that absorbs it or reflects the white ground to the camera. Carbon black is very absorbent of infrared radiation.
For the examination of paintings this technique was first developed by the Dutch physician Johan Rudolph Justus van Asperen de Boer (1935-2020), something he presented in his thesis in 1970. In 1987 he became professor in Materieel onderzoek van kunstvoorwerpen / Research into the materiality of art works at the University of Groningen, The Netherlands. His vast archive of infrared images is today kept at the RKD-Netherlands institute for Art History. The infrared examination technique has evolved over time and is today an indispensable part of any research into painting techniques.

The text is an expression of the discoveries made at the time of publication. We reserve the right to make changes as new information from the still ongoing research project may occur.